The art of the vikings and The seven styles

Norse artworks are some of the only first-hand sources concerning the people inhabiting Scandinavia in the Viking Age. But it may be very difficult and daunting to decipher the individual artworks, and even more difficult to try to recreate them, without a mental model of how the individual pieces fit together, drawn from extensive study of the works of experienced scholars. Often, the surviving original artworks are presented with little or no context, and often are also damaged or distorted due to wear and the effects of time. This guide is intended to paint a broad but cohesive picture of the styles and their development over time. It is by no means meant to be an exhaustive resource, but instead, to act as a stepping stone to help you understand the central concepts of Viking Age art.

Art historians have defined seven different Viking art styles, where each style was „en vogue“, or most popular in the works of Viking artisans, for from several decades and up to one and half a century.

The seven art styles of the Vikings, the periods where they were popular, are as follows, and in this time order: 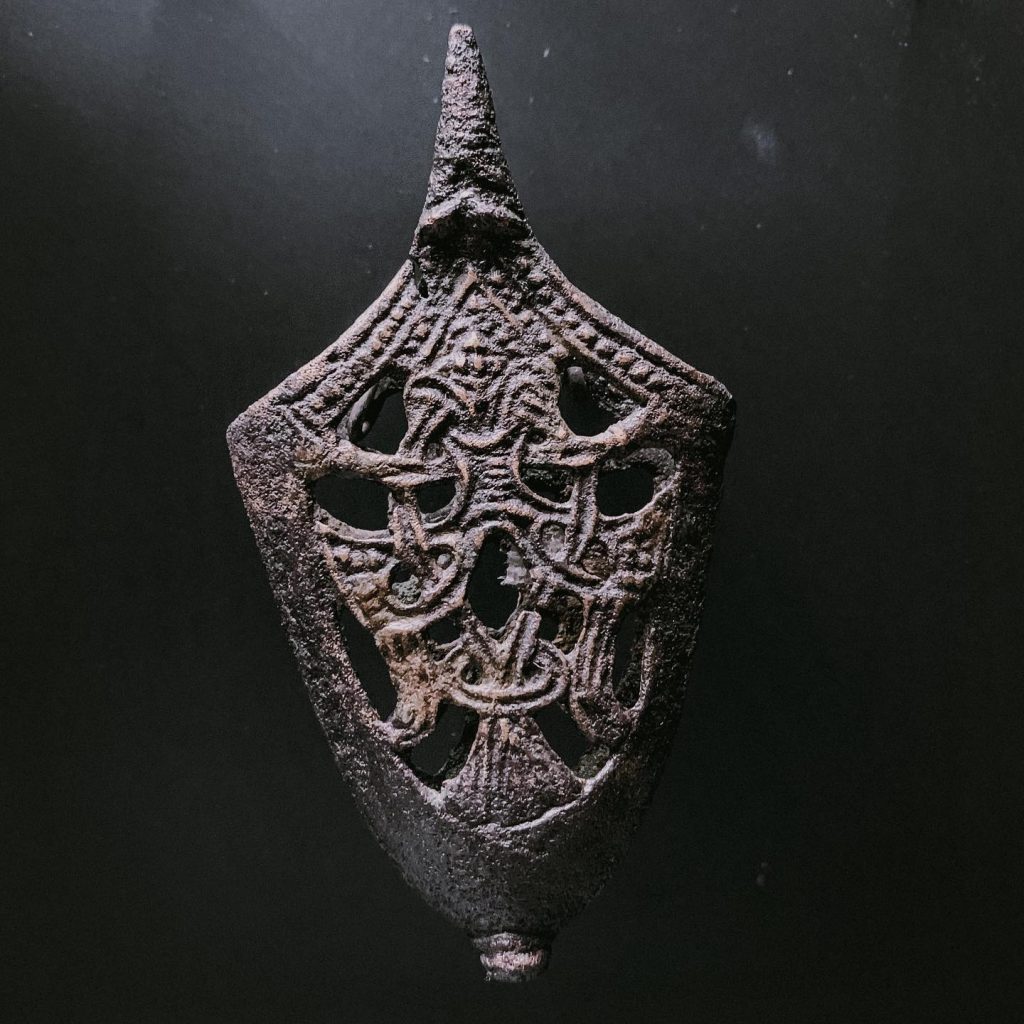 This is the earliest style of the Viking period. It is named after a grave find in Broa on Gotland, which is a Swedish island in the Baltic Sea. This is the style that was current in the actual days of Ragnar „Lothbrok“. That is the so-called Vendel period in the Nordic countries,which was the in-between period where not much was happening politically, and is defined between the more dramatic Migration and Viking periods. Some historians don‘t seem to see it as a Viking age style. Maybe that is because it formed before the Viking age itself? They just mention the Oseberg style in the beginning, or are designated as Oseberg/Broa. Artefacts that depict the Broa style are from the beginning of the Viking age at 793 A.D. and are known until around 850 A.D. The Broa style consists mostly of forms that depict animals, as is most common in Viking art styles. The animal forms swirl, sway and interlock across the surface that is decorated. There is a great freedom in abstract forms, and often astounding beauty, which is very distinct and unlike what other European cultures were creating in this time. 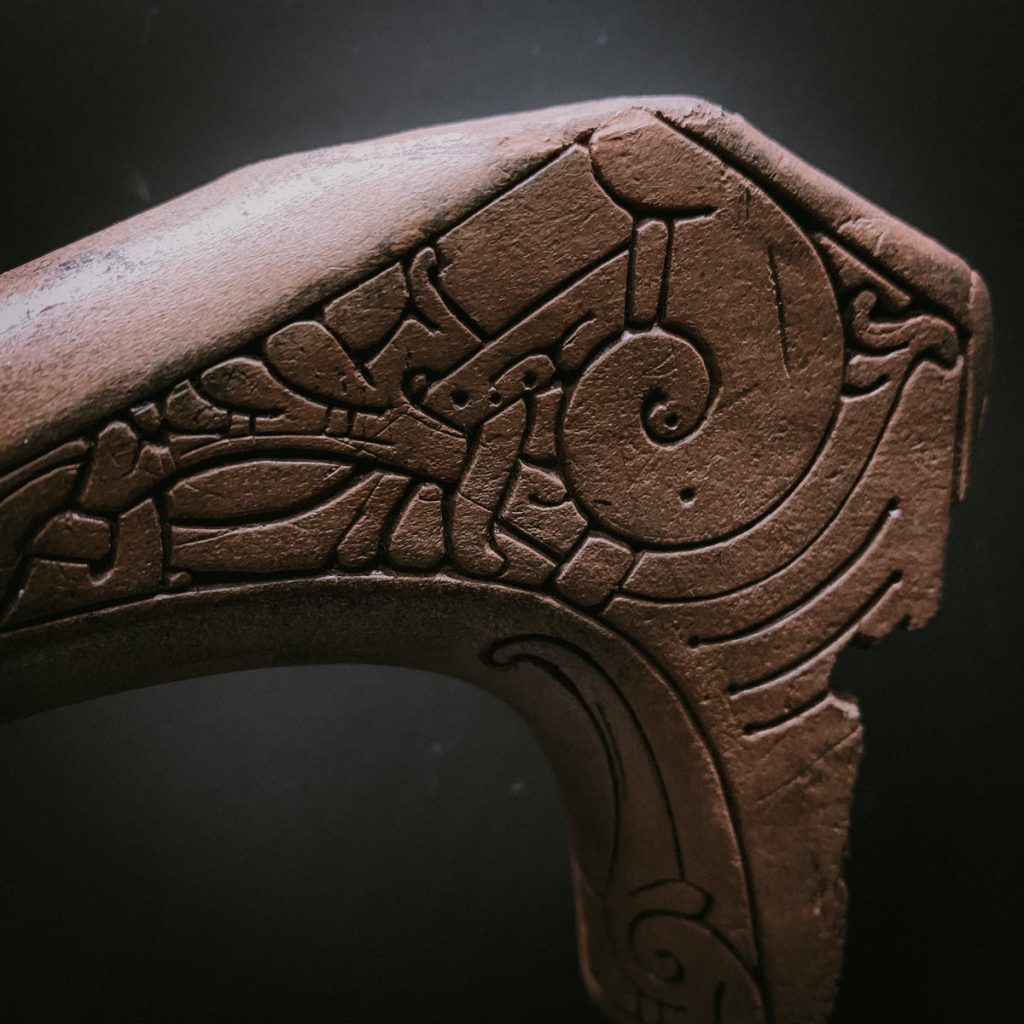 A characteristic motif of the Oseberg Style is the so-called gripping beast. This motif is what clearly distinguishes the early Viking art from the styles that preceded it. The chief features of the gripping beast are the paws that grip the borders around it, neighbouring beasts or parts of its own body.

Currently located at the Viking Ship Museum, Bygdøy, and over 70 feet long, the Oseberg Ship held the remains of two women and many precious objects that were probably removed by robbers early before it was found. The Oseberg ship itself is decorate with a more traditional style of animal interlace that does not feature the gripping beast motif. However, five carved wooden animal-head posts were found in the ship, and the one known as the Carolingian animal-head post is decorated with gripping beasts, as are other grave goods from the ship.[10] The Carolingian head represents a snarling beast, possibly a wolf, with surface ornamentation in the form of interwoven animals that twist and turn as they are gripping and snapping.

The Oseberg style is also characterized by traditions from the Vendel era, and it is nowadays not always accepted as an independent style.

Borre Style embraces a range of geometric interlace / knot patterns and zoomorphic (single animal) motifs, first recognised in a group of gilt-bronze harness mounts recovered from a ship grave in Borre mound cemetery near the village of Borre, Vestfold, Norway, and from which the name of the style derives. Borre Style prevailed in Scandinavia from the late 9th through to the late 10th century, a timeframe supported by dendrochronological data supplied from sites with characteristically Borre Style artifacts[12]

The ‚gripping beast‘ with a ribbon-shaped body continues as a characteristic of this and earlier styles. As with geometric patterning in this phase, the visual thrust of the Borre Style results from the filling of available space: ribbon animal plaits are tightly interlaced and animal bodies are arranged to create tight, closed compositions. As a result, any background is markedly absent – a characteristic of the Borre Style that contrasts strongly with the more open and fluid compositions that prevailed in the overlapping Jellinge Style.

A more particular diagnostic feature of Borre Style lies in a symmetrical, double-contoured ‚ring-chain‘ (or ‚ring-braid‘), whose composition consists of interlaced circles separated by transverse bars and a lozenge overlay. The Borre ring-chain occasionally terminates with an animal head in high relief, as seen on strap fittings from Borre and Gokstad.

The ridges of designs in metalwork are often nicked to imitate the filigree wire employed in the finest pieces of craftsmanship.

The Jellinge Style is a phase of Scandinavian animal art during the 10th century.[14] The style is characterized by markedly stylized and often band-shaped bodies of animals.[14] It was originally applied to a complex of objects in Jelling, Denmark, such as Harald Bluetooth’s great runestone, but more recently the style is included in Mammen style.

Mammen Style takes its name from its type object, an axe recovered from a wealthy male burial marked a mound (Bjerringhø) at Mammen, in Jutland, Denmark (on the basis of dendrochronology, the wood used in construction of the grave chamber was felled in winter 970–971). Richly decorated on both sides with inlaid silver designs, the iron axe was probably a ceremonial parade weapon that was the property of a man of princely status, his burial clothes bearing elaborate embroidery and trimmed with silk and fur.

On one face, the Mammen axe features a large bird with pelleted body, crest, circular eye, and upright head and beak with lappet. A large shell-spiral marks the bird’s hip, from which point its thinly elongated wings emerge: the right wing interlaces with the bird’s neck, while the left wing interlaces with its body and tail. The outer wing edge displays a semi-circular nick typical of Mammen Style design. The tail is rendered as a triple tendril, the particular treatment of which on the Mammen axe – with open, hook-like ends – forming a characteristic of the Mammen Style as a whole. Complicating the design is the bird’s head-lappet, interlacing twice with neck and right wing, whilst also sprouting tendrils along the blade edge. At the top, near the haft, the Mammen axe features an interlaced knot on one side, a triangular human mask (with large nose, moustache and spiral beard) on the other; the latter would prove a favoured Mammen Style motif carried over from earlier styles.

On the other side, the Mammen axe bears a spreading foliate (leaf) design, emanating from spirals at the base with thin, ‚pelleted‘ tendrils spreading and intertwining across the axe head towards the haft.

The Ringerike Style receives its name from the Ringerike district north of Oslo, Norway, where the local reddish sandstone was widely employed for carving stones with designs of the style.[

The type object most commonly used to define Ringerike Style is a 2.15-metre (7 ft 1 in) high carved stone from Vang in Oppland. Apart from a runic memorial inscription on its right edge, the main field of the Vang Stone is filled with a balanced tendril ornament springing from two shell spirals at the base: the main stems cross twice to terminate in lobed tendrils. At the crossing, further tendrils spring from loops and pear-shaped motifs appear from the tendril centres on the upper loop. Although axial in conception, a basic asymmetry arises in the deposition of the tendrils. Surmounting the tendril pattern appears a large striding animal in double-contoured rendering with spiral hips and a lip lappet. Comparing the Vang Stone animal design with the related animal from the Mammen axe-head, the latter lacks the axiality seen in the Vang Stone and its tendrils are far less disciplined: the Mammen scroll is wavy, while the Vang scroll appears taut and evenly curved, these features marking a key difference between Mammen and Ringerike ornament. The inter-relationship between the two styles is obvious, however, when comparing the Vang Stone animal with that found on the Jelling Stone.

With regard to metalwork, Ringerike Style is best seen in two copper-gilt weather-vanes, from Källunge, Gotland and from Söderala, Hälsingland (the Söderala vane), both in Sweden. The former displays one face two axially-constructed loops in the form of snakes, which in turn sprout symmetrically-placed tendrils. The snake heads, as well as the animal and snake on the reverse, find more florid treatment than on the Vang Stone: all have lip lappets, the snakes bear pigtails, while all animals have a pear-shaped eye with the point directed towards the snout – a diagnostic feature of Ringerike Style.

The Ringerike Style evolved out of the earlier Mammen Style. It received its name from a group of runestones with animal and plant motifs in the Ringerike district north of Oslo. The most common motifs are lions, birds, band-shaped animals and spirals.[16] Some elements appear for the first time in Scandinavian art, such as different types of crosses, palmettes and pretzel-shaped nooses that tie together two motifs.[14] Most of the motifs have counterparts in Anglo-Saxon, Insular and Ottonian art.[16]

The Urnes Style was the last phase of Scandinavian animal art during the second half of the 11th century and in the early 12th century.[17] The Urnes Style is named after the northern gate of the Urnes stave church in Norway, but most objects in the style are runestones in Uppland, Sweden, which is why some scholars prefer to call it the Runestone style.[17]

The style is characterized by slim and stylised animals that are interwoven into tight patterns.[17] The animals heads are seen in profile, they have slender almond-shaped eyes and there are upwardly curled appendages on the noses and the necks.

The early style has received a dating which is mainly based on runestone U 343, runestone U 344 and a silver bowl from c. 1050, which was found at Lilla Valla.[18] The early version of this style on runestones comprises England Runestones referring to the Danegeld and Canute the Great and works by Åsmund Kåresson.[18]

The mid-Urnes Style has received a relatively firm dating based on its appearance on coins issued by Harald Hardrada (1047–1066) and by Olav Kyrre (1080–1090). Two wood carvings from Oslo have been dated to c. 1050–1100 and the Hørning plank is dated by dendrochronology to c. 1060–1070.[19] There is, however, evidence suggesting that the mid-Urnes style was developed before 1050 in the manner it is represented by the runemasters Fot and Balli.[19]

The mid-Urnes Style would stay popular side by side with the late Urnes style of the runemaster Öpir.[19] He is famous for a style in which the animals are extremely thin and make circular patterns in open compositions.[19] This style was not unique to Öpir and Sweden, but it also appears on a plank from Bølstad and on a chair from Trondheim, Norway.[19]

The Jarlabanke Runestones show traits both from this late style and from the mid-Urnes style of Fot and Balli, and it was the Fot-Balli type that would mix with the Romanesque style in the 12th century.

The Urnes-Romanesque Style does not appear on runestones which suggests that the tradition of making runestones had died out when the mixed style made its appearance since it is well represented in Gotland and on the Swedish mainland.[20] The Urnes-Romanesque Style can be dated independently of style thanks to representations from Oslo in the period 1100–1175, dendrochronological dating of the Lisbjerg frontal in Denmark to 1135, as well as Irish reliquaries that are dated to the second half of the 12th century.[20] 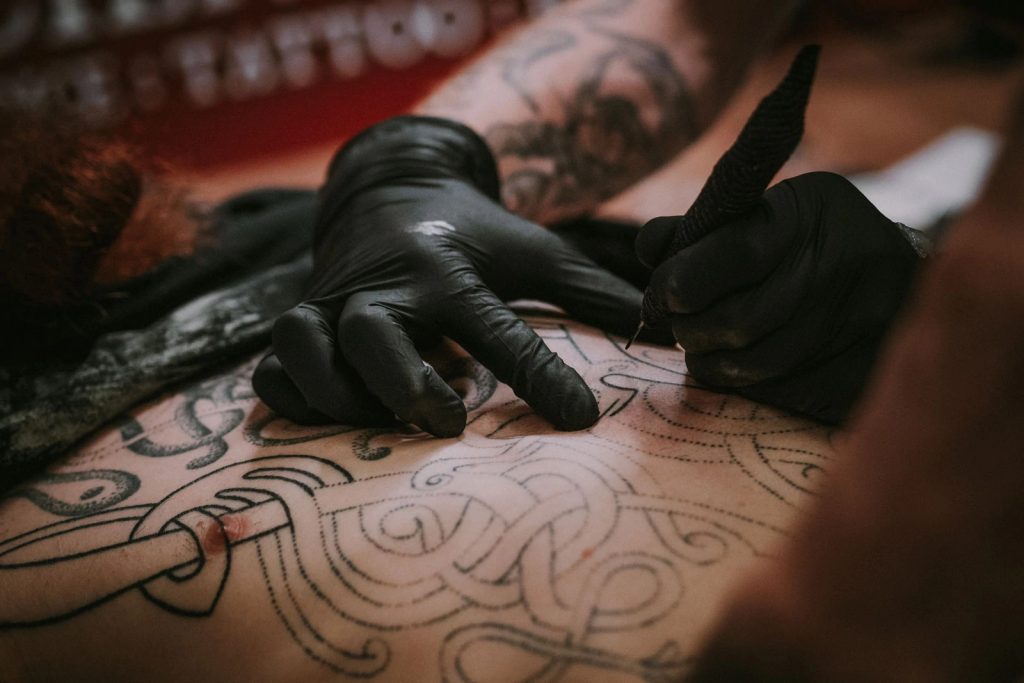 Traditional nordic tattooing based in Germany, Baden-Württemberg. Unique, handmade tattoos done by hand or machine – Handpoked or Machinetattoos or for bigger pieces both techniques mixed.